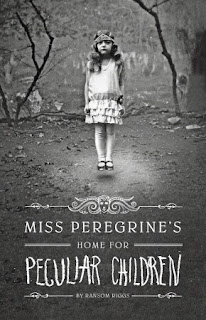 Author: Ransom Riggs
2 stars. The following contains some spoilers.
Grandfather Abe lived on a remote Welsh island in 1940 in a very strange orphanage where all of the children had special abilities. The orphanage is bombed and destroyed in a German air raid. Jacob returns to this place from present day to unlock the secrets of his grandfather's odd, secretive past and his gruesome death with the stories Abe has told him and the old, eerie photgraphs he has seen. He steps into a "time loop" where these people all live on in their strange little world.
I think that this story had the potential to be something great, the premise was an interesting one and time travel is always fascinating fuel for the imagination. It just sort of fizzled somewhere along the line. The book was peppered with vintage "peculiar" and just downright creepy photographs, many obviously doctored. These characters that were just randomly thrown in there didn't have much point, the photo just happened to fit in the weird category so it was added to the story.
The book came to an abrupt end just as it was starting to pick up some steam. They literally sailed off into the sunset. Must be setting up for a continuation which I definitely would not read.
Posted by Joanne Travis at 11:01 AM

I would love to hear from you!